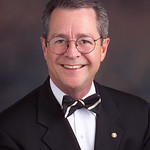 Professional Background: Professor Selby has been a licensed Architect since 1970 and principal in private practice since 1971. His work has been published in Progressive Architecture, Inland Architect, and elsewhere. He is co-author and Illustrator of The Hawkweed Passive Solar House Book, and he has written numerous papers on housing, urban design, and design education.

Professional Affiliations: Professor Selby has been member of the American Institute of Architects since 1970. He served as President of AIA Champaign-Urbana in 1987, AIA Central Illinois in 1990 and President of AIA Illinois in 2002. He served as Illinois Region Director on the AIA National Board from 2002 - 2005. Professor Selby was elevated to the AIA College of Fellows in 2004 as an educator. In 2005 he served as the AIA 150 Champion for AIA Central Illinois. He served as a Regional Representative of the AIA College of Fellows from 2007-2010 and was editor in chief of Fellowscope, the electronic newsletter of the COF from 2010-2015.

Teaching: Professor Selby taught in the design division of the School of Architecture at the University of Illinois at Urbana-Champaign 1984 to 2009. He has taught both undergraduate and graduate architectural design studios and several graduate seminars. He received the undergraduate Excellence in Teaching Award in 1987 and the Outstanding Faculty Award, College of Fine and Applied Arts in 1997. In the summer of 1991, he coordinated of the China Program in association with Tongji University in Shanghai. He served as Chair of the Design Division from 1988 to 1993. Professor Selby’s pro-bono service-learning studios includes work in such Illinois cities as Springfield, East St. Louis, Quincy, Rantoul (studying the reuse of Chanute AFB), and Highland Park (studying reuse of Ft. Sheridan). It is this body of work that earned him elevation to AIA Fellowship in 2004. He retired from the faculty in May of 2009 as Associate Director for Graduate Studies.

Professor Selby won the AIAS Illinois (American Institute of Architecture Students) Excellence in Architectural Education Award for the academic year of 2006-2007, the AIA Central Illinois Outstanding Educator Award in 2007 and the AIA Illinois Nathan Clifford Ricker Award recognizing the dedication and talent of an AIA member architecture educator in Illinois also in 2007.

Research and Creative Work: Professor Selby’s research and creative work focused on urban housing and urban design. Since 1985 he conducted several design research studies of housing for the elderly and low-income families. He presented a paper on research on housing for the elderly in 1993, as an invited principal speaker at the Design of Amenity International Symposium in Fukuoka, Japan. In 1995, the Kyushu University Press published an expanded version of this paper in Design of Amenity. In 1992 his graduate students worked with Edmund N. Bacon, FAIA, to develop new urban design strategies for the westward expansion of Philadelphia. This body of work appeared in my monograph entitled Urban Synergy: Process, Projects, and Projections published to coincide with a 1993 exhibition of this work in Philadelphia, "New Visions for Philadelphia." This work was also published in the 1995 book, Architecture of Tall Buildings, published by the Council on Tall Buildings and Urban Habitat.

Public Service: Professor Selby’s graduate design studio provided town planning and architectural design studies for the riverfront of Quincy, Illinois damaged by the Great Flood of ’93. The School of Architecture published this work in a monograph entitled After the Flood: Crises, Concepts, Conclusions. His most recent studios have provided designs for neighborhood improvements and affordable housing in the Emerson Park community of East St. Louis, Illinois. This work is on the World Wide Web of the East St. Louis Action Research Project, www.eslarp.uiuc.edu, now known as “Action Research Illinois.” In 2007 Professor Selby’s students provided pro-bono service to the City of Springfield for urban and architectural design concepts on five site supported by an AIA 150 grant. This work was published in Blueprint for Springfield: Designing the Future of the Historic Downtown of Illinois’ Capital City, published by AIA Central Illinois.

The following is from a personal profile published in the May 2013 issue of Fellowscope:

Professional: I discovered my passion for architecture in grade school. I studied architecture at the University of Illinois earning my B. Arch in 1967. I interned with Harry Weese, FAIA, in Chicago and practiced many years as a principal in The Hawkweed Group, Ltd. I co-authored and illustrated The Hawkweed Passive Solar House Book. I recently noticed one copy on sale on the Internet for $999! I returned to Illinois to earn my M. Arch in 1985, after which I joined the architecture faculty at my alma mater. I taught design studios with an emphasis on pro-bono design services for underserved people in disinvested cities such as East St. Louis, Illinois and elsewhere. I retired from teaching as Associate Director for Graduate Studies and Associate Professor Emeritus in May 2009.

Since earning my architect license I have been active in the AIA. In AIA Chicago I was director of the AIA Design Center School teaching architectural office skills to minority and low-income high school dropouts. I have served as President, and other offices, in AIA Champaign-Urbana, AIA Central Illinois, and AIA Illinois. I was on the AIA National Board of Directors from 2002 to 2005. I served as a Regional Representative from 2007 to 2010 and I was the editor of Fellowscope from 2010-2015.

Personal: I was born six minutes after my twin brother, Dick. (You can see our pictures together in the "Other" folder below-slide show "More Travel Adventures...") We grew up in suburban Chicago. I married my high school sweetheart, Barbara, in 1965. We have a son, Mike, who is a university professor teaching anatomy to future doctors. Barb and I love to travel. We visited 14 European countries in 14 weeks in 1969. Since then we’ve been to 49 states and all seven continents. I am an avid photographer and my travel photos may be found at http://www.robertselby.com. We love to snorkel in coral reefs; we “found Nemo” in the Great Barrier Reef in 2011.

Something Unique: One of my passions is music, especially jazz. I play trumpet and flugelhorn. For a dozen years I rehearsed with the Parkland Big Band. I am featured on a flugelhorn solo on the CD Kyle (Kimbrough, vocalist) Live at Pogo's. I still pick up occasional gigs from time to time in a quintet I call “Professor Bob and Friends.” In 2012 I sat in on cornet in the jazz group playing at the COF Convocation Dinner at the AIA National Convention in Washington, DC. I played Miles Davis’ tune “Four.”

Prof. Bob's wife, Barbara, contributed a significant number of images in these travel pictures. If it doesn't move (architecture, landscapes) Bob shoots them, if it moves (animals, people) it's likely that Barb took those. Flowers don't move much, but she takes most of those images, too. Bob took many of the underwater fish pictures, penguin pictures in Antarctica, birds and iguanas in the Galapagos Islands, and safari animals in Tanzania.

We make every attempt to correctly identify animals, birds, and fish. You are invited to contact me at rselby@illinois.edu with corrections.